Pattern for the future? 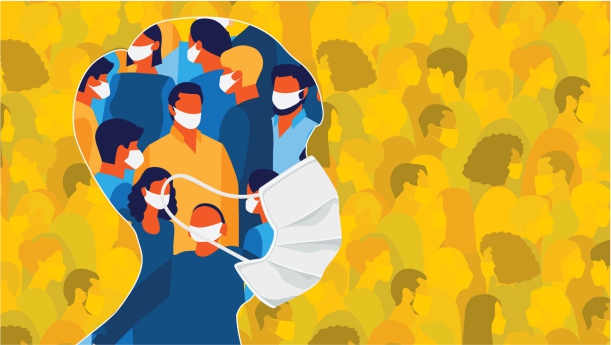 COVID-19 has effected a clear shift in consumer behaviour, but will it stay for long? I would like to submit that some of the changes may stay a lot longer. The use of digital technologies for education, work, and entertainment will continue to grow.

A few days before Diwali, as we were driving past Mumbai’s Dadar market, we were awestruck by the crowds. While many of them had a mask on, some were using it as a chin cover, or a throat cover. There was no question of social distancing. This was the same market that used to be empty right through July and August, after shops were permitted to open. Even during the Ganapati festival, this kind of a crowd was not present. We wondered what was happening.

When the pandemic and the related lockdowns were in place, Professor Sridhar Samu (Great Lakes Institute of Management) and I were discussing changes in consumer behaviour. We wondered how consumers would behave during the lockdown, immediately after it would be lifted, and may be a few months after the markets open. The research we conducted uncovered a few interesting consumer segments. We thought there will be a significant number of ‘Revenge Shoppers’ in India. This term was originally coined after China opened up and Chinese shoppers went on a shopping frenzy. Our research told us that there were some Revenge Shoppers in India too, mostly affluent and younger consumers, but their numbers were not too large. Then there were the ‘Revelation Shoppers’; these were the consumers who realised, during the lockdown, that they needed a new iPad, or a new dish washer. This segment drove the Diwali consumer durables sales boom we saw in November. Then came the ‘Reduced Shoppers’ who were hurting and were keen on conserving their savings. These were the less affluent and older cohorts. The fourth group we uncovered was of those we called ‘Research Shoppers’— those looking for the best deal. These cut across all income and age groups.

In the last few weeks, I feel there is also a new set of shoppers emerging, and I would call them ‘Relief Shoppers’—those who are relieved that they can shop now.

As the pandemic and its fear spread, consumers came to adopt several new behaviour patterns. It has been a good time to be an e-com platform or merchant. Indian consumers who were addicted to COD (cash-on-delivery) have quickly moved to prepayment options like mobile wallets or credit cards. The last time we saw that kind of mass movement was when Indian consumers had no cash, during the demonetisation drive. But they quickly went back to COD once ATMs started spewing cash. Now the behaviour seems to have stuck. It is likely this will stay unless e-com merchants score a self-goal by encouraging COD once doorstep delivery is allowed in housing societies.

The other big movement, at least in cities like Mumbai, has been delivery at the gate. This is a big breakthrough for e-com brands and can reduce delivery costs by a huge margin. In advanced countries, this has been the practice for many years.

It is always fascinating to see multiple packages lying outside suburban homes in the US. If housing societies stick to the policy of not allowing delivery boys inside their premises, then this could also be a big trend that may hold.

Many sectors are going to change. Let me start with the multiplex and mall visits. These have seen very slow uptick in November.

Contrast this with the crowds in the Dadar market. What is happening here? I suspect the more affluent consumer, the mall regular, is a little more worried about the disease and is not wanting to take the additional risk. My interviews with leading brands revealed that while footfalls have dropped, almost all the consumers end up buying; conversion rates are almost near 100%. Luxury brands are showing tremendous enthusiasm to woo back consumers (check out the Rolex and Omega ads in the papers prior to Diwali). Their core consumers have not lost much during the lockdown, but if they get out of the habit of splurging on the latest luxury watch, they may not come back— this could be a fear driving the ad spends.

In our survey, almost 14 per cent of the consumers wanted to go back to watching movies on big screens. If we were to draw a comparison between the Dadar market and the upmarket mall, then it is likely that single screens will see a quicker uptick than fivestar multiplexes. Our research with 1000+ consumers revealed that the most dreaded thing today is international travel. Just a small percentage of consumers are keen on travelling overseas, which is now curtailed due to international agreements. But I suspect that even after it opens up, there is going to be a drastic drop in outbound international travel. What does the Revenge or Research Shopper do? They are already travelling within India. And this trend will gain momentum. A research study pointed out that 52 per cent of those interviewed preferred domestic travel over international destinations. What was also interesting was that 68 per cent preferred to travel by their own transport and shun public transportation systems. There is, however, a huge sense of regret over having lost out one year in pandemic-related measures. A large 49 per cent said that they want to travel more to compensate for lost time. And 70 per cent of those interviewed were looking for good deals. In a sense, the Revenge and Research Shoppers are going to be driving domestic tourism bookings in the coming months.

Consumers have been locked in for months now. Schools and colleges have not opened as this article was being written. A family outing for a dinner and a movie is now a distant dream. While Swiggy and other food delivery services are seeing a big boom, the ready-to-cook market has never had it better.

Indians have been very slow in accepting new food products. Most homes prefer cooking each meal, that too ‘scratch cooking’ from the basic raw materials. Marketers have always lamented the lack of demand for ready-to eat (RTE) and ready-to-cook (RTC) offerings. To clarify, ‘ready to eat’ are products that can be put in a microwave for a few minutes, taken out, and eaten. ‘Ready to cook’ are products that can help in cooking but will still need a fair bit of human ingenuity. Maggi 2-Minute noodles is a good example of an RTE that managed to capture the imagination of Indian mothers by straddling both the RTE and RTC markets—make it straight off the pack or add your creativity, with cheese, butter, vegetables, or egg. The extended homestay has also created a demand boom for products that will add variety to the daily diet. As The Economic Times reported, ‘as consumers crave a break from home food and are still skeptical of eating out or ordering in, the packaged ready-to-eat segment is witnessing a sales boom’. The article quotes Sachid Madan (Chief Executive, Fresh F&V and Frozen Food, ITC Limited) as saying, “People who were averse to eating frozen foods are now drawn to it. There is a surge in demand”.

While we used to have two market definitions, RTE and RTC, we now also have RTH, or ready-to-heat products. These are products like rotis, parathas, and wraps. The desire to try new products, different tastes, and different cuisines is a welcome change for branded food marketers. If this trend holds, then we will see a major transformation in the branded foods market in the country There has been a dramatic change in the way consumers have adopted digital technologies too—for education, for work, and for entertainment. These effects will last long.

Let us now cut to June 2021. And let us assume that vaccine is available to all; for some free and for others for a fee. Will we see consumers going back to what they were doing in June 2019? Or, will some vestiges of June 2020 remain? I would like to submit that some of the changes may stay a lot longer. It is possible that domestic travel will continue to boom as international travel slowly picks up. In a similar vein, malls will start seeing crowds and multiplexes will see sell-out crowds. The food marketing window will continue to widen. Concern for health and hygiene will continue in a little bit muted way. The use of digital technologies for education, work, and entertainment will continue to grow.

All said, some trends we have seen in November 2020 will stay for a lot longer than November 2021. The pre-Diwali crowds in Dadar will continue as always.

Ambi Parameswaran is an independent brand coach, best-selling author, and founder, brand-building.com. Spring – Bouncing Back from Rejection is his latest book

If employees find meaning in their work and are valued for whatever they do, their motivation levels will always be at their peak. The best that any organisation can do is attach meaning to the employee’s work as a sense of meaning will win over the impediments that hinder employees’ growth in the organisation.

A matter of purpose

Employees are pretty observant; they do not miss much. The actions and behaviours they see modeled and the ideals their immediate supervisor appears to value will inform their decisions and behaviour at work. If they see a management team that prioritises tasks, efficiencies, and productivity (job functions), then that is what they will focus on—often at the expense of the company’s own mission.

The issue with our triggers is that in a bid to get it all, we can end up losing it all.

Embracing lopsidedness will—and it must—become more prevalent. The modern business world is complex. Dealing with complexity is a team sport. It requires deep expertise across a range of topics, each of which may be possessed by different individuals on your team.