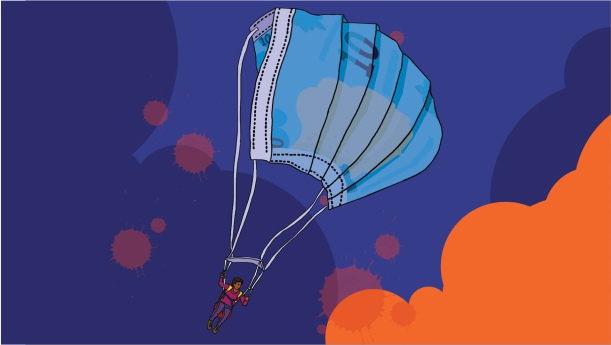 In a country like India, with its vast geography and the second largest population in the world, fintech has been reaping plentitudes of benefits. Be it startsups mid-sized firms, or big corporates, everyone is leveraging the country’s tremendous IT potential, everyone is being able to script their success story riding on the back of the growing digital wave.

Financial technology or fintech in short, has been enjoying its moments under the sun for quite some time now. From nowhere in sight a few years back, fintech firms have transformed the conversation about financial intermediation in the country beyond recognition in a very short span of time. Minds with rich imagination even portrayed the scorching growth of the sector as yet another David versus Goliath story with David gaining grounds in the battle field by miles every passing day.

Many of the once puny firms [startups] have now grown in size and achieved a critical mass by chipping away business volumes from bigger banks and other well-entrenched players, in a highly competitive financial domain. Interestingly, their spectacular growth has nudged the leaders in the financial service industry to toe the line, one way or the other, rewriting the much touted `follow the leader’ maxim. Credit is also due to these sprightly innovators who have braved many odds including the yawning trust deficit and push back from stubborn customers by convincing them to join their ranks to meet their daily money moves. Arguably the right minded regulations or Redtechs and the launch of UPI platform by the government with its telling impact on customer adoption rates added tail wind to the sails of the sector.

A new force of habit for Indians
The fintech culture, as it evolved over time has now become synonymous with the way individuals do their day-to-day financial transactions. Ironically, the Covid-19 pandemic came as a blessing in disguise for the sector, spurring adoption rates as the country of 1.25 billion moved to find contactless and cashless ways for transacting their daily financial needs. Suffice to say that Covid-19 disruption played out to be a big boon for the fintech firms with their business volume surging to record highs. It has even altered the behavioural pattern of individuals for good and logging on to fintech platforms has now become a force of habit for most individuals.

The ticket size is getting bigger
However, despite large scale customer adoption, a major irritant that has been spooking the sector’s aspirations is the low ticket size of transactions. This is because despite roaring volumes, the value of the overall transactions remained low. But this will soon become a thing of the past as the regulator has allowed the lenders to use fintech platforms for onward lending to micro and small enterprises. This is decidedly going to be a game changer for the fledgling sector as the amount transacted through this channel will gross higher volumes and leave enough scope for margin expansion.

End of the road for super specialisation
As the sector has been growing at a faster clip than the broader economy with high growth visibility, it is only natural that the space has got crowded, if not overcrowded, over a period of time. But it arguably still has enough space for more players as each firm focuses on highly atomised niches, though, in the long-run, it may not sustain umpteen players with the accompanying economic benefits not justifying the financial costs incurred. With investors becoming more demanding and asking for results from firms before writing the next cheque, the small but super specialist players with little capital buffer can no longer afford to get away with their cash burns.

Suitors in waiting
The rapid pace at which the sector has been growing all these years has predictably lured many big names with deep pockets. And growth compulsions are egging them to take aim at small players operating in niche spaces. It makes good business sense for them to have a higher market share with a finger in many pies. That saves them the trouble of re-inventing the wheel again. Predictably, the small, super specialist players who are left with little fortune to grow business and market share are the natural take-over candidates. While large players sitting on a huge pile of marketing rupees or dollars can still afford to on-board new customers, cash-strapped players with investors breathing over their shoulders to show results have limited options before them but to court the best suitor coming their way.

Getting valuations right
A big positive, however, playing out for the small players with high revenue potential ahead is the changing cap table. With the ticket size of transactions poised to move from small to medium to large, the valuation gap between the high-flying e-commerce platforms and fintech companies is closing fast. This presents a golden opportunity for players with a respectable market share but little cash to burn for further expansion an easy way to gain capital and move on in business. With the second wave of Covid poised to peak sooner than expected, fintech space with high growth visibility will see a flurry of deal activities in the next six months to one year since the booming sector has got all the three things necessary and essential for consolidation – steady supply, booming demand and compelling valuations.

And, enter the super apps
The impending big bang entry of the `Super Apps’ as they choose to call themselves will further turn the wheels of consolidation in the fintech space. These apps are billed as a one-stopsolution for all financial needs of a customer with a single platform offering the services of as many apps. But the big question is will another David with a different market disruption approach give the new Goliaths—super apps—a run for their money is the question that nags the minds of many. Indeed any comments at this point of time may prove immature as the outcome, right now, is anybody's guess. Let us wait and watch.

AI-driven agritech solutions hold the potential to eliminate dated farming techniques and unleash the untapped potential of a sector dominated by fragmented land holdings and lack of mechanisation.

Summary: The pandemic has become a modern-day kingmaker, bestowing record profits and growth in some industries. However, it is not just mere luck. The best companies are innovating faster than their peers, investing in their people, and making the most out of their data. Combine this with a little bit of luck, and you end up in a fantastic place.

by Ruben Ugarte
Indian Management May 2021
View all