Today, organisations operate in business environments that are marked by continuous innovations, disruptions, climate changes, shifts in value systems, pandemics, and uncertain economic situations. There is an imminent need to reimagine leadership in this changed scenario as leaders have to adopt adaptive strategies and build new capabilities on the go to identify challenges and opportunities in real time and respond instantly.

This requires a fundamental shift in the thinking and skills of leaders. They must come up with strategies to save, transform and grow the business amid the radical uncertainty. The ability to make strategic decisions to ensure business resilience and agility and lead the way forward to achieve sustainable growth would be the mark of a NewAge Leader.

Workshop on ‘New Age Leadership’ will be focusing on leadership strategies and decision making skills needed to succeed in a disruptive and ever-changing business environment. This programme will help participants from across sectors and functions to develop business acumen and hone their strategic decision making skills in a competitive environment through interactive sessions with business leaders and Business Simulation Workshop - a technique for developing, testing, and evaluating business strategies in a virtual environment which can manage hundreds of variables simultaneously.

Vipin Sondhi is the Managing Director and Chief Executive Officer of Ashok Leyland, the 2nd largest manufacturer of commercial vehicles in India, a US $ 2.09 billion company with footprint that extends across 50 countries. Vipin has over three decades of experience in Manufacturing and Engineering based companies such as JCB, Honda, Tata Steel and Tecumseh. Prior to Ashok Leyland, he spent 13 years at JCB lndia and was a member of JCB's global executive team. He is an alumnus of IIM, Ahmedabad, IIT Delhi, and did his schooling at The Lawrence School, Sanawar. Vipin has a strong and proven track record as a leader, and is a passionate hands-on professional. He was appointed by the GoI as the Chairperson of the Board of Governors, of the Indian Institute of Science Education and Research and is an elected member of the CII National Council and has been the Chairman of Excon, South Asia’s largest exhibition for Construction Equipment. He was conferred with numerous awards including The ET “Most Promising Business Leader of Asia – Construction Equipment Industry”, an Honorary Fellowship by the Centre for Excellence in Project Management (CEPM), The CEO of the Year Award at CEO India Awards, the Udyog Rattan Award by the Institute of Economic Studies and the Young Manager’s Trophy by the CII in 2000. He is Vice President – SIAM and Vice President Automotive Skill Development Council and the Chairman, CII National Committee on Future Mobility & Battery Storage and Chairman of CII’s National Committee on R&D and Innovation.

B. Ashok is former Chairman of Indian Oil Corporation Ltd. An alumnus of the College of Engineering, Madras University, Mr. Ashok majored in Mechanical Engineering. Later, he was selected for the prestigious National Management Programme and earned his PGDM from MDI-Gurgaon. He has over 35 years of expertise in the Oil and Gas sector. As a head of Indian Oil's Retail Sales, he managed a strong retail network of about 24000, which contributes nearly 55% of the volumes. Being the State Head of Indian Oil's two major States, he handled the complete business portfolio besides acting as the Coordinator for the entire industry. He has also been a harbinger of the Business Development activities of Indian Oil and also headed the overseas business of Indian Oil in South East Asia. He has been in leadership and policy formulation positions in Indian Oil for several years and has established many benchmarks for the industry as well.

He is an economic analyst, advisor and writer based in New Delhi, India. He serves on boards of enterprises and non-profit entities which are leveraging emerging technologies for sustainable, equitable growth. He has written and edited books, reports and papers on economic development. His latest book is India Automated: How the Fourth Industrial Revolution is Transforming India published by Pan Macmillan and Kranti Nation: India and The Fourth Industrial Revolution. He is a frequent speaker at events run by leading chambers of industry on policy advocacy and leads public discourse at several platforms in India and abroad. He served as a member of the Global Agenda Council at WEF for eight years. He is now a member of WEF’s Expert Network. Previously, he was the Editor of Bloomberg TV in India. He writes opinion pieces for Business Standard newspaper, The Sunday Guardian newspaper among other publications.

All participants joining the programme will be awarded the 'Certificate of Participation' from AIMA after the programme. 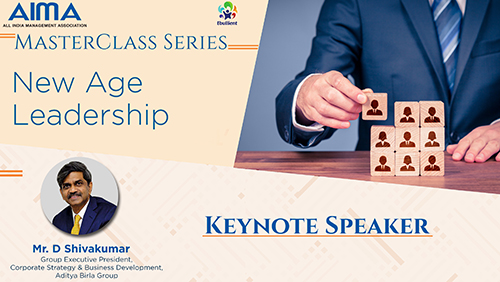