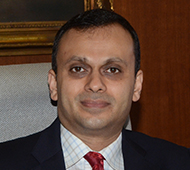 Shrinivas V Dempo is Chairman of the Goa-based Dempo Group of Companies, which has diversified interests in industries such as calcined petroleum coke, shipbuilding, food processing, real estate and newspaper publishing.  He has been Chairman of the western region of the largest industry lobby in India, the Confederation of Indian Industry.  In 2013, Mr. Dempo was named honorary vice consul of Italy in Goa, India.  He was appointed Chairman (Independent Director) of Automobile Corporation of Goa Ltd, a Tata Group Company.

Mr. Dempo has a long association with football, having patronized a premier football club. He was named among the 50 most influential people in Indian sports in the 2010 Sports Illustrated Power list as President and Chairman of Dempo Sports Club

Mr. Dempo is on the Executive Council of Goa University, besides being associated with a number of non-governmental organizations performing yeoman service to society such as the Charles Correa Foundation as also the Goa Cancer Society whose president he is. He continues his multi-generational engagement with Goan society, which covers institutions and programmes of higher education, cultural enrichment, environmental conservation, sporting excellence and affirmative action, under the Dempo Charities Trust and Vasantrao Dempo Education & Research Foundation.

In his capacity as chairman the prominent petroleum coke manufacturing listed company, Goa Carbon Ltd, Dempo was honoured in the year 2014 with the Asia Pacific Outstanding Entrepreneurship Award India 2014 in recognition of his pursuit of responsible business practices by the Asia-wide organization, Enterprise Asia, dedicated to management development and ethical business.

Mr. Dempo earned his Bachelor’s and Master’s degrees from the University of Mumbai in 1990 and 1992 respectively. He later took a Master of Science degree in Industrial Administration & Finance from Carnegie Mellon University, Pittsburgh, Pennsylvania, USA in 1995 and in 2019 he was elected as a member on their Board of Trustees. In 2020 he received the Tepper Achievement Award, in recognition of his influential roles as Chairman and Managing Director of the Dempo Group and in professional associations and civic organizations in India.